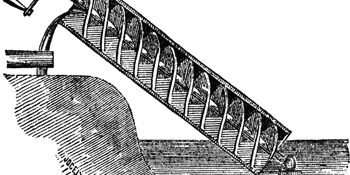 The ancient Greek mathematician, physician, engineer, inventor and astronomer Archimedes is widely considered to be one of the greatest and most innovative minds to have graced the Earth. Best known for his work with innovative machines, advances in the understanding of physics and an accurate early approximation of Pi; his Archimedean Screw Pump presented a revelation that helped birth the modern world of pumps. First devised by Archimedes in roughly 250 BC during a visit to Egypt, the Archimedean Screw Pump is still used today, including a reverse pump operating as a generator in the Thames powering Windsor Castle.

The Archimedean Screw Pump consists of a screw structure housed inside a hollow cylindrical pipe. Using either a windmill or manual labour to keep the screw rotating, the bottom end of the screw located in a body of water, scoops up the water which is transporter up inside the pipe by the rotating screw.

This transported water emerges from the top of the pipe, feeding the adjoining irrigation system. Used primarily for draining low lying water out of mines and other bodies of water. The construction of the Screw Pump does not necessarily have to be watertight, as long as the water transported is greater than the amount of water lost during leakages.

Pumps in the ancient world

Amongst the greatest historical achievements of the Archimedean Screw Pump is reportedly being the method used to irrigate the Hanging Gardens of Babylon, one of the Seven Wonders of the Ancient World.

Illustrations of the construction of the gardens depict the screw pumps being operated by workers treading on the outer casing to turn the apparatus. An Archimedes screw was also used in the stabilisation of the Leaning Tower of Pisa in 2001 by British Engineer John Burland. Slightly less historically significant is the use of Archimedean Screw Pumps in chocolate fountains. Pump technology has advanced beyond recognition in the past 150 years with the invention of new technologies, complete with bespoke designs for specific jobs. Despite this, the Archimedean Screw Pump has had a significant effect upon the pump industry and paved the way for future innovation.