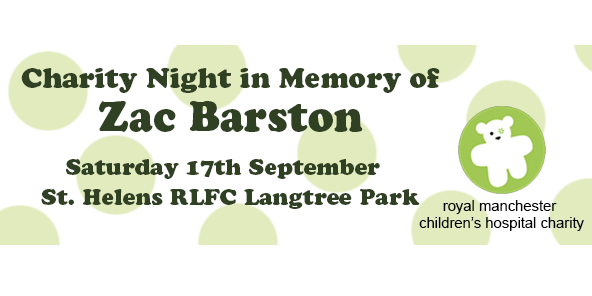 Our Sales Director Martin Donaldson is hosting a charity event for Zac Barston who played for the football team that is managed by Martin.

Our Sales Director Martin Donaldson is hosting a charity event for Zac Barston who played for the football team that is managed by Martin. Last year the team dealt with the terrible news of the untimely death of one of their teammates Zac Barston. Zac died on 30th March 2015, aged just 10 years from an aggressive brain tumour ‘glioblastoma multiforme’. Zac had been fighting this for some time and had been under the care of the Royal Manchester Children’s Hospital.

Brain tumours are the biggest cancer killer of children and people under the age of 40 than any other form of Cancer in the UK. Despite this, amazingly brain tumour research receives less than 1% (0.7%) of national cancer research spending in the UK.

All proceeds from the event will go to the Zac Barston Tribute Fund, supporting the Children’s Brain Tumour Research Network at the Royal Manchester Children’s Hospital. This means that every penny raised will go directly into treatment and improving the quality of life for children unfortunate enough to be in a similar situation to Zac, plus research into beating this truly horrible disease.

We are hoping that you can help in any way you can, either in the form of a gift donation or anything that could be used as a prize for the raffle and live auction. We hope to raise as much money as possible for this charity which is very close to our hearts, in memory of Zac.

We are also looking for main sponsors of the event to help cover the key costs such as catering, printing, DJ, MC, lighting rig, wine sponsor, table decoration, lighting, etc.

If you are interested in supporting the event by attending on the night, tickets are available from £25 per head and events on the evening will include: –

If you would like any further information or if you can support the event with any of the above please do not hesitate to contact either Martin or Jeff – contact details are below.