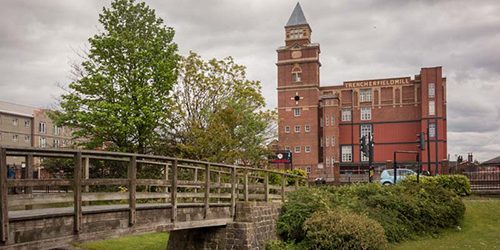 Flowtech Water Solutions have had the pleasure of being involved with the water system at one of Wigan’s most historic buildings.

Flowtech Water Solutions have had the pleasure of being involved with the water system at one of Wigan’s most historic buildings.  Built in 1907, Trencherfield Mill is home to an iconic steam engine that used to power the mill in the 1930’s. The engine is on display at the mill and is one of Wigan’s main visitors’ attractions.   In recent times the mill has been renovated to house 52 luxury flats.

Flowtech were contacted some time ago with regards to problems with warm water in the cold system and also sudden, massive energy usage. On surveying the site, Flowtech found that the original pump set was not only oversized, but also running both pumps continuously due to a control system failure.  Even during periods of zero demand, both pumps continued to run against a closed system, generating unwanted heat and consuming a massive 11Kw.  This was due to a failure of the transducer within the control system and as there was only one, the unit ran without adequate control.  Considering the issues to original booster set was having and the high motor sizes, it was deemed best to replace the unit with a more modern, reliable set up with much smaller Kw output per pump.

The original pumps were 5.5Kw and without recent issues with control, the energy usage would always have been high due to the selection of a twin pump set.  This means that any small demands, toilet flushes etc would cause the full electrical load to be consumed.  Flowtech have looked into the most efficient way of boosting the water system and came up with a three pump, variable speed system where the motors were just 1.5Kw each.  The unit is set up with a standby pump so even with two pumps running, there is only 3Kw being consumed.  Due to the accurate sizing of the system, it is unlikely that this will happen regularly, unless there is a sporadic high demand for water.  This means that the majority of the time, the energy usage will be a quarter of its predecessor.  The new Flowboost 3V system was equipped with multiple transducers and pressure vessels to ensure that a single component failure would not affect the unit as previously, as every major part is backed up, giving incredible reliability.  Due to the height of the building, water hammer protection was also incorporated.

The existing booster set was removed early morning by the maintenance contractor and the new Flowtech unit was fitted, piped in and electrically wired a short time later. Flowtech had an engineer on standby to respond immediately once the water system required re-instating. The set was commissioned and the site can now enjoy lower energy bills and a unit that now stops when there isn’t water demand from the system. It is expected that the new unit will pay for itself within 2 years of installation, depending on usage.

As with all Flowtech equipment, the booster has a comprehensive parts and labour warranty for two years from the date of commissioning. During this two years it is also covered by Flowtech’s 24/7 call out coverage.

If you would like to know more about Flowtech and their booster systems, please contact us anytime on 0333 200 1756 or e-mail info@flowtech.org.uk.